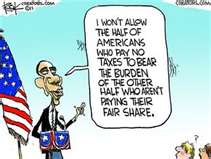 Michael Ono of ABCNews found an interesting contradiction. Liberal icon Elizabeth Warren, practically the inventor of “you didn’t build that”, disagrees with an aspect of Obamacare, her ideological soulmate’s crowning achievement. Ono does well to note the discrepancy between Warren’s usual positions and her rhetoric in this specific instance. However, he misses the mark on what the contradiction really says. The opening paragraph’s embedded liberal assumptions and language obscure the real issue:

U.S. Senate candidate Elizabeth Warren is a superstar within the Democratic Party and a lightning rod for Republican outrage over the issue of tax fairness. But there is one tax that Warren doesn’t like and it’s part of Obamacare.

Conservatives lose the battle over the language time and again. Allowing the party that created the family and ambition-destroying welfare state to get away with claiming the mantle of “social justice” is one example. Likewise, what is “the issue of tax fairness”? Did the Republican platform include a section titled “Our plan for unfair taxes”? Populist  posturing that stokes envy against high earners should not associate the Democrats with “tax fairness”. More apt but less pleasant-sounding would be the clearer phrase “tax increases”.

The story continues by describing the one and only tax Warren just can’t stomach: END_OF_DOCUMENT_TOKEN_TO_BE_REPLACED