What did the once great Chris Rock say, that the president is like “the dad of the country”?

If that’s the case, then it looks like Obama is one of those terrible dads from the movies who promises his son he’ll be at his baseball game but also tells his boss he won’t miss the important meeting occurring at the same time. Basically, he’s Jim Carrey in Liar Liar.

At least according to Dan Pfeiffer:

Promises, promises – White House Senior Adviser Dan Pfeiffer claimed Sunday that the millions of lost insurance policies under ObamaCare was the result of a prioritization of promises. President Obama, Pfeiffer said, meant to keep his promise to allow Americans to keep their policies, but that a more important promise got in the way. “[I]f the president were to allow people to have those plans be downgraded, or insurance companies to keep selling barebones plans …if he had done that he’d be violating even more important promise to the American people, that everyone would have a guarantee to access of quality affordable health insurance,” Pfeiffer told ABC’s “This Week.” Pfeiffer did not say when Obama deemed the “if you like it” pledge inoperable due to the “barebones” promise.

Anyone else now anxiously awaiting Pfeiffer’s memoir of the Obama presidency, just for his overwrought description of the scene when Obama came to this dreadful realization:

The Situation Room fell silent.
Moments felt like hours before Obama finally spoke, “Could you please repeat that, Kathleen?”
“Our experts… they’ve looked at this issue every which way,” Sebelius continued, “and your promises, Mr. President… they… they contradict each other.”
The wrenching in Obama’s gut shone through clearly on his face, before his head fell into his hand, “My God… what have I done…” 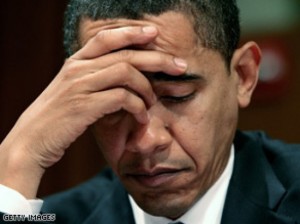