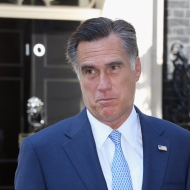 • The media mocked Mitt Romney for supposed gaffes on his recent overseas trip. In England, he pointed out some obviously troublesome aspects of their Olympics preparation. In Israel, he stated an existential truth about culture and its effect on a nation’s economic well-being. In Poland, his gaffes went meta when a staffer angrily shot back at the media for aggressively asking about the trip’s earlier purported gaffes. Most disgusted by the affair was Joe Biden, who couldn’t believe the incredibly low standards for gaffes these days.

• India’s overstretched government power grid collapsed, leading to massive blackouts affecting half of the 1.2 billion population. Joe Biden was not reached for comment, but nonetheless stated, “These blackouts are a tragedy. Literally trillions of slurpees will have been lost due to this catastrophe,” before opening up in goofy grin and exclaiming, “The gaffemeister is BACK! WOO! Take that Romney!”

• President Obama donated $5000 to his own campaign this week, the federal maximum that an individual can give to a campaign. Since it’s his own campaign, there is actually no legal limit to what Obama can give. When Obama found this out, he immediately issued an executive order correcting this blatant injustice, citing “basic fairness”.

• Wednesday saw lines around the block at Chick-Fil-A locations across the country, as customers came to support the company’s right to free speech after liberal politicians in Chicago, Boston, and New York decried CEO Dan Cathy’s statements in favor of traditional marriage, threatening to deny the company permits to open up new locations in their respective cities. In a related story, no lines were seen at White Castle, as the public continued ignoring their support for the return of monarchy.

• The Chinese were one of four Olympic badminton teams to be disqualified after attempting to throw their preliminary matches in order to gain a more favorable quarterfinal seed. I explained to my wife how this is analogous to how China purposefully devalues their currency in order to increase exports for a more favorable trade deficit, and she responded, “Shut up, nerd.”

• On Wall Street, an automated program flooded the market with millions of trades Wednesday morning, causing widespread confusion. Market observers had originally blamed a report on poor job growth for the turmoil, but upon hearing it was just a software glitch, they blamed Skynet.