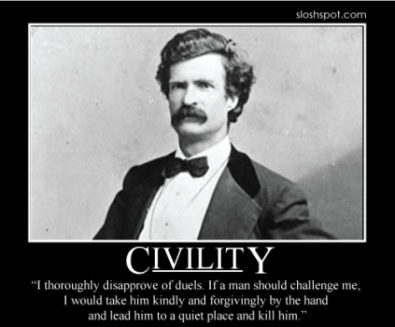 • Harry Reid took to the Senate floor to accuse Mitt Romney of not paying taxes for the last 10 years, claiming a credible source. Press Secretary Jay Carney didn’t fully back Reid, but said this could all be cleared up if Romney just released more tax returns.  Later, Reid accused Romney of farting, and when Romney denied that too, Jay Carney said, “I don’t necessarily agree with Senator Reid, but we all know that he who denied it supplied it.”

• The pro-Obama SuperPac Priorities USA ran an ad blaming Mitt Romney for a woman’s death. The media praised the civility of Obama when he staked out the middle ground, emphatically stating, “I denounce these types of attacks. Mitt Romney is a felon tax cheat, not a murderer.”

• Nancy Pelosi labeled the Republicans the “E. Coli Club”, insinuating that their desired budget proposals are so reckless they’ll lead to dirty air, food, and water, in turn making children sick with E. coli. Later in the week, she claimed to have been visited by ghosts while in a meeting at the White House. I know those two things are true, because I received links to articles about them in an email titled “She used to be third in line to the presidency…”

• In Arizona, Jared Loughner pled guilty. If you don’t remember, he is the man accused of reminding us all that our political rhetoric needs to be more civil.

• Usain Bolt of Jamaica won gold in both the 100 meters and 200 meters for the second consecutive Olympics. But he was once again runner-up to Anthony Weiner for the “Most Unintentionally Perfect Last Name” award.