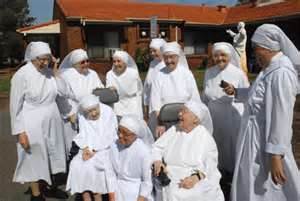 Caught between their Catechism and Caesar, the Little Sisters of the Poor must either pay crippling fines or defy their church’s teaching and comply with the Obama Administration’s contraception and abortifacient mandate. It’s fair to say that you’ve surrendered any claims to pragmatism when your policies force those who have taken a vow of chastity to buy birth control. When my grandchildren ask me if there was a point when I knew for certain that the United States was going down the tubes, I’m going to say, “Yes, it was when we made the nuns buy condoms. That’s when I knew.”

The Little Sisters won’t be able to afford the fines for refusing to comply, and since all of their older siblings are Poor, they can’t expect much financial help there either. As a result, they’ve announced that they may be forced to move their order out of the country due to the religious intolerance. If that happened, the United States would join a prestigious list of Little Sister religious oppressors that includes the Chinese communists and Myanmar military junta. That’s like the Brazilian national soccer team suddenly joining an NFL division that included the Oakland Raiders and Baltimore Ravens, only incredibly sad instead of absolutely fascinating.  END_OF_DOCUMENT_TOKEN_TO_BE_REPLACED