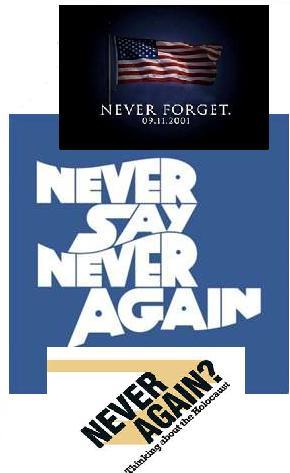 Never Forget? It took us 11 years.

Most forgetful are those placing even an ounce of blame for murderous terrorism on a “filmmaker”. Who was the “filmmaker” before the original 9/11? We didn’t spend time pandering to perverse rationales then, so why are we talking about a “filmmaker” now?

Who is the “filmmaker” for the latest Afghan army member who turned his gun on his American Marine counterparts after sharing dinner with them?

The madman who committed the Fort Hood massacre, did he have a “filmmaker”?

Imagine taking a time machine back to September 12, 2001, and telling an aggrieved New Yorker that 11 years later, Muslims would attack a US consulate, murder four Americans, and part of the Secretary of State’s response would include condemning a goofy, anti-Islamic video as “reprehensible”, thus legitimizing the supposed cause-and-effect relationship it had with murder. When he was done suppressing his rage and disbelief, he’d probably just say, “Oh. So we forgot.”

Make no mistake, the only difference with this year’s September 11th terrorist attack on America and its citizens was capability, not desire or motivation. If those who pre-planned and executed the attack were able to, they would have been more than happy to replicate the original 9/11, and slaughter 3,000 Americans instead of 4.

As with desire, the motivation was no different either. “They hate us because of our freedom” always sounded cliché, but last week confirmed its truth.  These people hate us for our way of life, and kill us because of that, not because of any specific incitement.

It’s like a drunk in a bar sucker-punching a guy because “he looked at me funny”. Even if the guy actually did look at him funny, are you really gonna argue that the drunk had a point? The reality is that the drunks are angry people spoiling for a fight. They aren’t gonna stop punching us until we alter our way of life by staying home on the weekends. And even then they’ll only leave us alone for a little while.

Well, we do have another option. We could stand united and make it very clear that if they sucker punch us, they’ll immediately get thrown out of the bar and into an alley on their asses, no questions asked. But that would take resolve. It’s much easier to say, “Come on people, you know you can’t look at them funny,” and just hope you’re not the next victim.

A solemn vow made after the Holocaust was “Never Again”. Never again would the world sit idly by while evil men plotted and committed genocide. Yet today, Iranian leaders are developing a nuclear bomb while the country’s president states that his goal is annihilation of the Jewish state. The reaction of much of the world is annoyance that the Israeli leader is getting uppity about the situation. “Never Again” has become a hope and a prayer instead of a declaration and statement of intent.

Eleven years after the first 9/11 attacks, “Never Forget” has suffered the same fate.