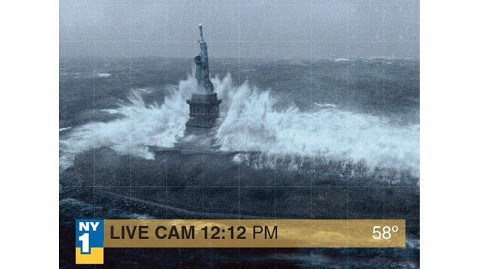 This morning, I read a very misinformed and misleading editorial from the New York Times titled ‘A Big Storm Requires Big Government,’ The column begins thus:

Most Americans have never heard of the National Response Coordination Center, but they’re lucky it exists on days of lethal winds and flood tides. The center is the war room of the Federal Emergency Management Agency, where officials gather to decide where rescuers should go, where drinking water should be shipped, and how to assist hospitals that have to evacuate.

Before I read this column, I’m glad that I had spent hours watching coverage of Hurricane Sandy as it rushed ashore and shot straight over my home. I watched as the governors of NY, NJ, DE, and PA stood at podiums, as did many of their county and city officials, and presented an aura of command and leadership as they recited the logistical numbers regarding first responders, the locations of shelters (along with detailed contingency plans), and further warnings and advisories regarding anticipated weather conditions, road closures, and power disruptions. I saw these men on TV discussing mandatory evacuations and thought about all the hard lessons learned from Hurricane Katrina regarding the importance of readiness by local and state authorities. I saw each of these men do this without FEMA.

I also watched an interview with astronauts aboard the International Space Station (Commander Sunita Williams’ hair flailed around her like a peacock in all its gravity-free glory) and thought about the aging satellite fleet that will have gaps in its ability to monitor these storms starting in 2017 due to gross neglect.

Which leads to several themes:  END_OF_DOCUMENT_TOKEN_TO_BE_REPLACED