“The letter of the law is too cold and formal to have a beneficial influence on society. Whenever the tissue of life is woven of legalistic relations, there is an atmosphere of moral mediocrity, paralyzing man’s noblest impulses.” – Alexander Solzhenitsyn, June 8, 1978

Suing because you tripped on an unmarked crack in the sidewalk is child’s play. In Italy, you can now hold someone legally accountable for not putting a proper warning sign on a crack in the earth’s crust:

In a verdict that sent shock waves through the scientific community, an Italian court convicted seven experts of manslaughter on Monday for failing to adequately warn residents of the risk before an earthquake struck central Italy in 2009, killing more than 300 people.

If you think preventative medicine is driving up health care costs, just wait and see what preventative geology or meteorology will do to FEMA’s budget. Like doctors performing medically unnecessary C-sections to avoid lawsuits, unnecessary evacuations of major cities will become a common CYA maneuver on the part of bureaucrats with no incentive to accept any risk. Apart from the visible financial demands such an arrangement will place on nations already on the brink of fiscal ruin, the hidden implications of a frightened scientific community could still be worse:

“It’s a sad day for science,” said seismologist Susan Hough, of the U.S. Geological Survey in Pasadena, Calif. “It’s unsettling.”
That fellow seismic experts in Italy were singled out in the case “hits you in the gut,” she said.

If the gut is where courage is stored, the metaphor is apt. The risk of public mockery and the scorn of peers will always make a number of innovative thinkers hesitant to stick their necks out, but the threat of jail time will surely cause a dramatic spike in the amount of potential scientific pioneers who choose safer career fields. 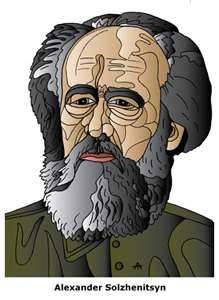 The situation brings to mind Alexander Solzhenitsyn’s controversial address to the Harvard graduation class of 1978. Following a critique of western society’s overly legalistic culture, which the Italian earthquake case has provided a farcical example of 34 years later, the great Russian dissident denounced the associated mindset that  “…the world belongs to mankind and all the defects of life are caused by wrong social systems which must be correct.” In the speech, Solzhenitsyn was referring to the belief that societal constructs are the true root cause of what most believe to be inherent flaws in human nature, and modifying the social system could cure the flaws. But the line also applies to the Italian earthquake case. What else would drive a society to criminalize scientists who offered risk assessments on unpredictable events, if not that “the world belongs to mankind” and therefore any of its defects are attributable to human error, for which someone must be held accountable.

The same legal regime will undoubtedly be used against scientists who “deny” global warming. Future storms causing devastation on par with Hurricane Katrina will surely lead to calls for scientists who question the connection between manmade greenhouse gases and extreme weather events to be held legally accountable. Exhortations to “make them pay” have already been heard. The climate change movement suffers from the same “the world belongs to mankind” hubris, evidenced by their nearly limitless belief in the ability of political action to change something as vast and complicated as earth’s climate.

Finally, the Italian earthquake case included a familiar component, the distraught family members of the victims:

Relatives of some who perished in the 2009 quake said justice had been done. Ilaria Carosi, sister of one of the victims, told Italian state TV that public officials must be held responsible “for taking their job lightly.”

Whether in a case as ridiculous as failure to predict earthquakes, or any more common tragedy that leads to a family seeking a financial settlement, we are told not to judge the emotional demands for “justice” by grief-stricken victims who have lost family members. After all, ‘we don’t know how we’d react if we were in that same situation’.

But that mindset falls into the same trap that Solzhenitsyn critiqued. What limiting principle is more likely to uplift the victims involved, enabling them to unleash their “noblest impulses” in their time of great suffering: the “cold and formal” legal system, or calls for them to show mercy and forgiveness from a morally grounded society? After all, “A society which is based on the letter of the law and never reaches any higher is taking very scarce advantage of the high level of human possibilities.”