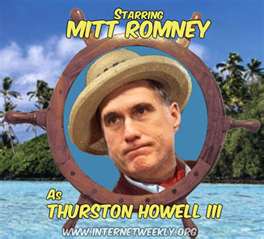 • Mother Jones released a secret video of Mitt Romney at a private fundraiser in May, where he stated that he would not seek the votes of the 47% of Americans that paid no income taxes and were dependent on government. Outrage ensued, and President Obama responded forcefully, saying you can’t become president when “writing off a big chunk of the country.” He continued, “You see, the key is to identify a much smaller sliver of the country, like the top 1 or 2%, and demonize them in order to rally the rest of the country around you in an envy stoked fury. That’s how you become president.”

• Republicans pounced on a different video, one from 1998 that has President Obama declaring, “I believe in redistribution.” Republicans believe that the video provides an unsettling snapshot of his true ideology. “His comments give the impression that Obama wants to ‘spread the wealth around’. No way he gets elected after saying something like that,” said Joe Wurzelbacher, or as he now goes by, Joe the Very Sarcastic Plumber.

• Tensions continued to rise between China and Japan this week as the result of a territorial dispute regarding the Senkaku Islands. When asked for comment, White House Press Secretary Jay Carney emphatically stated, “While the administration still believes that any escalation into violence is unacceptable, these rising tensions are clearly the result of a disgusting and reprehensible movie that mocks a great people’s history with vicious stereotyping, depicting Asian-American sorcerers who kidnap young women. I’m of course talking about Big Trouble in Little China.”

• The Obama administration continued to muddle through their story that the Benghazi, Libya consulate attack was a spontaneous result of initially peaceful protests sparked by a YouTube movie trailer. Following news that RPGs were used, and that the Libyan government warned the US of a potential attack days in advance, word has now come out that there were no demonstrations whatsoever when the attack took place.  Backed into a corner, Jay Carney finally came clean, “Okay! I admit it! We watched Wag the Dog at movie night last week and got a little carried away. It’s the same thing that happened with the Justice Department after they watched Fast and Furious. Everyone makes mistakes. Sue us… Wait, actually, please don’t sue us.”

• In Rhode Island, a school district banned father-daughter dances after the ACLU notified them of an upcoming lawsuit for gender discrimination by a mother whose daughter’s father was not involved in her life. In an interesting twist, the lawsuit was expected to be joined by most of the boys at the school, who much prefer dances where the girls’ fathers are not present, and who wanted to stave off any possibility of one day having to do something so lame as bringing their mom to a school dance.

• A 1700 year old scrap of papyrus was discovered that quotes Jesus as saying, “My wife…” before being cut off. Scholars say that the artifact, dated 300 years after Christ’s resurrection, is unclear and by no means definitive proof that Jesus was married. Meanwhile in heaven, Rodney Dangerfield says that Jesus was responding to the question, “What made you willing to endure the Crucifixion?”

3 thoughts on “Weekly Breakdown: The magical world of movies”