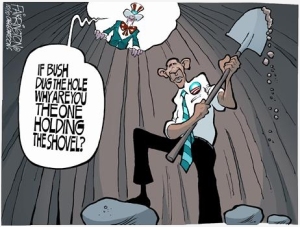 The incomparable Thomas Friedman once stated: “The first rule of holes is when you’re in one, stop digging. When you’re in three, bring a lot of shovels.” Philosophers have spent the years since poring over this mysterious rule.  Is it a lost Proverb? Does it have Trinitarian implications? And what is Tom Friedman’s stance on pot legalization?

When Obama’s “you didn’t build that” rant put on full display his disdain for private enterprise and self-reliance, he answered one aspect of the mystery: how one man can be in three holes at once. His “shovel-ready” minions in the media, who share his un-American, humanities professor worldview, took Friedman’s advice and grabbed a bunch of them.

Here are the three holes Obama now finds himself in:

Hole #1: Government as the center-of-society

Mitt Romney’s “government-centered society” critique struck a chord with many, and Obama’s band finished playing the tune. Obama releases an embarrassingly hypocritical ad complaining he was taken out of context, and the media nod their heads. But looking at the context makes the president come off worse, as Obama set up his infamous line with this insult: “I’m always struck by people who think, well, it must be because I was just so smart.” Why so nakedly insult business owners? Because in his worldview, government is the center of society, the catalyst that causes all reactions. The president believes that anyone whose life and words counter that philosophy should be treated with scorn. Because Americans still applaud earned success, he usually hides it better.

Hole #2: Government as family and parent

NBC news found a 2002 Winter Olympics speech delivered by Romney, in which he takes the time to recognize all the Olympians’ families who helped them get to this point.  Obama’s apologists say that the president was simply doing the same thing in his anti-business diatribe. But Romney reflected on their origins after crediting the Olympians, whereas Obama reflected on their cause (government, of course) after insulting the businessmen. That aside, NBC News desperately creates an equivalency between government and family, implying their interchangeability, reiterating the Obama campaign’s Life of Julia assumptions. “Thanking” the government as if it were a loving father strikes most as creepy, and only makes sense if you view government as committed liberals do. Thus, our next ‘hole’.

Hole #3: Government as godhead of a religious cult

Bear with me, because Dylan Matthews of the Washington Post is about to get all existential on us:

Descriptively, it’s clear what Obama means: No one has even built a road on their own, and if they had, it wouldn’t be good enough to drive on…

But let’s suppose you did build a road entirely on your own, and you charge tolls and you make a lot of money off it. Do you deserve that money? … maybe you’re only capable of understanding the concepts needed to build a road because you inherited DNA that gave you a brain that can understand those concepts. Maybe you wouldn’t even have had gotten into civil engineering unless an aunt had given you a book on it as a present, and if she had chosen to give you a book on rocketry instead you would have pursued that career. Do you still deserve that money?

Political philosophers are sharply divided on these questions. Many do not like the idea that people “deserve” things at all. For one thing, most people think that to deserve something, a person must have done something to deserve it. That implies that there are actions that for which certain people are responsible. Seem obvious? A lot of metaphysicians don’t think so. For one thing, that claim presupposes the existence of free will. Some philosophers are what is called “hard determinists,” who deny that anything that could be called free will exists. Others, called compatibilists or “soft determinists,” believe that it is both true that free will exists and that every action is determined. They reason that free will exists if people can act according to their own motives without interference. Those motives are determined by factors outside those people, compatibilists argue, but they still have free will.

But if hard or soft determinism is true, how can people be responsible for their actions, and thus deserve things because of them?

And that’s what it looks like when a pseudo-intellectual sharts in his brain.

When the president’s defenders find it necessary to argue against the existence of free will, they’re not in a good spot. Even if we ignore the historically empirical benefits of private property protection, or the moral case for the pursuit of happiness laid out in the Declaration of Independence, and accept the legitimacy of Matthews’ “no one deserves anything” spittle… then what? It certainly doesn’t follow that we should let the government decide who gets what. However, that is exactly what Obama’s rant suggests. You should have no claims on your own production, but arbitrary decisions on how to allocate resources are supposedly just, simply because it is the government who is issuing them. In short, the government is god. Let’s hope Americans still possess an instinctive resistance to tyranny, and will emphatically reject this mindset come November.