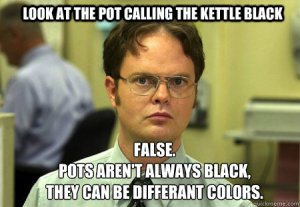 Ezra Klein recently attempted to answer the supposedly perplexing question of “Why (do) Republicans Oppose the Individual Health Care Mandate?” A simple blog post could have done the trick; first noting that a majority of the country has opposed Obamacare since its passage, and then utilizing Occam’s Razor to conclude that the electoral incentive, as evidenced by the 2010 mid-term shellacking, served as the Republicans’ motivation. But no, Klein instead takes to The New Yorker to weave a devious tale of political partisanship, intellectual inconsistency, and faulty brain chemistry. He begins:

On March 23, 2010, the day that President Obama signed the Affordable Care Act into law, fourteen state attorneys general filed suit against the law’s requirement that most Americans purchase health insurance, on the ground that it was unconstitutional. It was hard to find a law professor in the country who took them seriously. “The argument about constitutionality is, if not frivolous, close to it,” Sanford Levinson, a University of Texas law-school professor, told the McClatchy newspapers. Erwin Chemerinsky, the dean of the law school at the University of California at Irvine, told the Times, “There is no case law, post 1937, that would support an individual’s right not to buy health care if the government wants to mandate it.”

If Klein couldn’t find law professors who took the arguments seriously, then he didn’t look very hard. Klein suffers here from the same confirmation bias he’ll go on to criticize in the rest of the article. And why is “post 1937”, a seemingly arbitrary year, relevant? The Constitution was adopted 150 years priors, but 1937 was when FDR threatened and intimidated the Supreme Court with his court packing scheme. Just because the court started making ridiculous rulings regarding economic liberty at that point doesn’t mean we should be beholden to those flawed decisions forever. Next comes the back story of Republicans long-lost love for the individual mandate:

The mandate made its political début in a 1989 Heritage Foundation brief titled “Assuring Affordable Health Care for All Americans,” as a counterpoint to the single-payer system and the employer mandate, which were favored in Democratic circles. The mandate made its first legislative appearance in 1993, in the Health Equity and Access Reform Today Act—the Republicans’ alternative to President Clinton’s health-reform bill—which was sponsored by John Chafee, of Rhode Island, and co-sponsored by eighteen Republicans, including Bob Dole, who was then the Senate Minority Leader. Ten years later, Senator Ron Wyden, an Oregon Democrat, began… building a proposal around the individual mandate, and tested it out on both Democrats and Republicans. “Between 2004 and 2008, I saw over eighty members of the Senate, and there were very few who objected,” Wyden says.

While there was certainly some support for an individual mandate as a counter to Hillarycare’s single payer, and more recently with Wyden-Bennett, Klein dramatically overstates it by saying they “spent two decades pushing” it. If that were the case, then what happened during the Bush years? Surely Republicans had the votes.

Even so, what’s his point? That politicians can be inconsistent, and influenced by partisan interest or public polls? Not exactly an astounding revelation. The greatest evidence for that right now is the man in the White House, who during the ’08 Democrat primary eviscerated Hillary for the mandate in her plan and then changed his mind as soon as it was convenient. Just like he previously said there was nothing he could do about the DREAM act… until he suddenly decided last Friday to pretend he can make up his own laws, in complete contempt of the Constitution. Why? Because he finally decided it was in his electoral interest to take that chance.

Believing his flimsy backstory to be established, next Klein delves into the New Phrenology:

Jonathan Haidt, a professor of psychology at New York University’s business school, argues in a new book, “The Righteous Mind,” that to understand human beings, and their politics, you need to understand that we are descended from ancestors who would not have survived if they hadn’t been very good at belonging to groups. He writes that “our minds contain a variety of mental mechanisms that make us adept at promoting our group’s interests, in competition with other groups. We are not saints, but we are sometimes good team players.” … For that reason, Haidt told me, “once group loyalties are engaged, you can’t change people’s minds by utterly refuting their arguments. Thinking is mostly just rationalization, mostly just a search for supporting evidence.”

That statement is certainly true. People believe what they want to believe or what they think they should believe. We all are better off, especially those of us interested in politics, when we are consciously on guard against this tendency. However, the folly comes in pretending that this is something unique to the Republican party or individual mandate opposition. A perfect counter-example is the Iraq war. Democrats overwhelmingly supported it before its unpopularity became a political liability, at which point they convinced themselves that they were lied to by President Bush and began vigorously opposing it.

Heck, Klein’s own article is another great example. The question of whether the individual mandate is unconstitutional is still never taken seriously, even though those arguments dominated the Supreme Court hearings and made Obama Solicitor General Verrilli look foolish. Klein essentially says, “I talked to some members of my group and they said the arguments aren’t legit.” And that was enough for him.

Orin Kerr says that, in the two years since he gave the individual mandate only a one-per-cent chance of being overturned, three key things have happened. First, congressional Republicans made the argument against the mandate a Republican position. Then it became a standard conservative-media position. “That legitimized the argument in a way we haven’t really seen before,” Kerr said. “We haven’t seen the media pick up a legal argument and make the argument mainstream by virtue of media coverage.” Finally, he says, “there were two conservative district judges who agreed with the argument, largely echoing the Republican position and the media coverage. And, once you had all that, it really became a ballgame.”

The process of how an argument is popularized is then described in further detail, but with an insinuation of illegitimacy. The usual moderates whine about think-tank influence on policy and the democratic process in general, as if they should be beholden to nothing but their own personal agenda. And finally:

But, whatever the motives of individual politicians, the end result was the same: a policy that once enjoyed broad support within the Republican Party suddenly faced unified opposition—opposition that was echoed, refined, and popularized by other institutions affiliated with the Party.

Switch “Republican” with “Democrat” and that description would apply to the policy of segregation in the 60s. Was that a bad “end result”? Likewise, gay marriage was rejected out of hand by a majority of Democrats within recent memory, yet it’s now the preferred policy of a Democratic president. Would Klein argue that the process that got us there was illegitimate? Of course not. The merits of an argument are what matter. Complex biological or psychological evaluations to determine motivation are for those trying to convince the world that they’re still right, even after they’ve lost the argument.

2 thoughts on “How Ezra Klein ironically proves his own point”