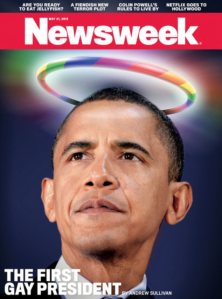 Just as President Obama’s unpopular push for healthcare reform chucked dozens of Democrats on the funeral pyre of their House majority, his latest endorsement of gay marriage has forced several Senators to walk a tightrope. Instead of a safety net at the bottom, they’ll be falling to electoral defeat. Here are the Senators wobbling in this high wire act:

Sens. Jon Tester (Mont.) and Claire McCaskill (Mo.), the two most vulnerable Democratic senators, have declined to endorse Obama’s call for the legalization of gay marriage.

Sens. Joe Manchin (W.Va.), Bob Casey (Pa.) and Bill Nelson (Fla.), Democrats who have easier races but in states that could become more competitive by November, have also backed away from Obama’s stance.

They all represent states with constitutional amendments or laws banning same-sex marriage.

And it certainly doesn’t help that Senator Reid is jostling the rope:

Senate Majority Leader Harry Reid (D-Nev.) predicted Thursday the Democratic Party would adopt a pro-gay marriage plank in its platform. While that may happen when delegates to the Democratic National Convention meet September in Charlotte, N.C., the party remains divided.

Here’s the approach to the balancing act for ‘moderate’ Democrats in right-leaning states:

“Jon believes in civil unions for committed same-sex couples but in Montana a marriage is defined as between a man and a woman,” said Andrea Helling, Tester’s spokeswoman.

Montana is one of 30 states with constitutional amendments defining marriage as between one man and one woman, according to Human Rights Campaign, a group that promotes gay rights.

Yes, the article uses a gay ‘rights’ group as its source, and says the group ‘promotes gay rights’ rather than ‘promotes the gay agenda’, but I digress.

“I have a record fighting against discrimination and standing up for people’s civil rights based on their sexual orientation.  I believe marriage should be left to the states, and Florida voted on same-sex marriage in 2008,” he said in a statement to The Hill.

Ladies and gentlemen, did he just throw his entire state under the bus while managing to make no sense on the issue? Indeed he did.

April Mellody, a spokeswoman for Casey, said her boss “supports civil unions, strongly opposes discrimination and has condemned discriminatory measures such as a federal constitutional amendment.”

If a federal constitutional amendment is discriminatory, then why isn’t he for gay marriage?

On the flip side, how many planks of the Republican platform is Senator Manchin going to agree with before he realizes he’s in the wrong party?

“His position hasn’t changed; he believes marriage is between one man and one woman,” said Manchin spokeswoman Marni Goldberg.

The article then deviates into narrative-building. Here’s an interesting take on what Obama would call “a law that was passed by a strong majority of a democratically elected Congress,” which was part of his argument in why the Supreme Court shouldn’t overturn Obamacare. In discussing the 1996 Defense Of Marriage Act, the article states:

Obama’s administration has found that law unconstitutional and chosen not to enforce it.

As Nancy Pelosi would say, “Are you serious?” The Executive Branch’s job is enforcement of laws voted on by Congress and signed by the President. The case for prioritization in enforcement can be made, but refusal to enforce at all is an entirely different matter.

In a dishonest arrangement meant to imply Republican support, and therefore invoke most hallowed ‘bipartisanship,’ the article states:

Advocates have made progress recently toward overturning Ohio’s ban. Last month, state Attorney General Mike DeWine, a Republican, certified petition language for an amendment that would define marriage as a union of two consenting adults, regardless of gender. It could come up for a vote next year.

I’m glad that AG DeWine did his duty and certified a legally created petition. It’s what he should do. It doesn’t mean Republicans endorse the position.

Obama’s announcement has caused all kinds of bedlam. He united the Republican party, knocked himself back in the polls, reduced the Democrats’ chances of retaining their Senate majority, and managed to get Newsweek to call him the ‘First Gay President.’ Not a bad week’s work for the man liberal historians claim is the most brilliant mind to ever occupy the White House.