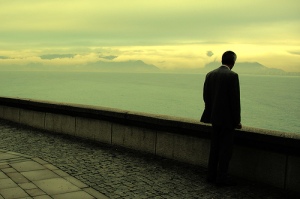 84% of Americans make their living in the private sector. Recent polling shows only 38% of Americans have a positive outlook on the economy. If Obama really believes those 84% are doing fine, he has no intention of changing economic policies of which a majority disapprove. By putting himself at odds with a majority of the country, the president has chosen a very unusual political campaign strategy.

No longer does the great uniter of 2008 even pretend to exist. Obama has abandoned his mantle of warrior for the 99% and instead opted to champion the 16% of working Americans who call the public sector their home. By stating the private sector is fine, then in the next sentence discussing plans to support state and local government, the president has put the private sector on notice: “You’re on your own.”

Given Obama’s repeated assaults on what he terms as Republican “you’re-on-your-own economics,” there’s rich irony to this gaffe. However, this gaffe is also the latest in a disturbing pattern of cutting ties with entire blocs of Americans through demonization or abandonment. How many enemies will Obama make and how isolated will he become by the time the November elections roll around?

The NY Times recently revealed that Obama keeps a ‘Kill List’ of foreign terrorists, from which the president personally decides who he will assassinate next. It turns out that Obama and campaign manager David Axelrod mull over a similar list of domestic enemies: END_OF_DOCUMENT_TOKEN_TO_BE_REPLACED