“Americans have to learn how to take a joke.” – Herman Cain, 2012 Republican primary debate

Showing the talent for deflection common among philanderers*, Herman Cain also hit on a truth. In addition to a sense of humor, he could have added a sense of perspective. Distinctions need to be made in life, otherwise confusion reigns, and a country that self-loathes about the enhanced interrogation of proven terrorists yawns when 5 year olds who say “bang” at school are grilled until they pee their pants. Likewise, when our culture of offense leads us to impose a zero tolerance policy on offensive speech, our social vitality takes a hit.

The most recent example comes in the form of Ohio State president Dr. Gordon Gee, whose experience of having his comments recorded at a private OSU Athletics Council reception shows Obama’s surveillance state knows no bounds. Speaking extemporaneously to colleagues,  Gee added Catholics and the SEC to a previous long list of “offensive” mild dig targets that includes the Polish army and the Little Sisters of the Poor. Certain groups, who face real persecution and suffer from fresh wounds, deserve extra sensitivity from polite society. But if we can’t tell the difference between those situations and insulting the Little Sisters of the Poor’s nonexistent football team, or the SEC’s nonexistent educational standards for athletes, then our social confusion might be terminal.

When we act scandalized by simple jests, we affirm the professionally aggrieved, and encourage the more thuggish in their ranks. Reinforcing the culture of offense is not only annoying, but dangerous.Societal tensions explode into violence not because of jokesters, but because of persons and groups who take themselves entirely too seriously. The root cause of seemingly random street violence between gangs is not ill-timed “Yo Momma” jokes, but a gang culture bred to believe that verbal slights are grievous assaults against their honor. When the Mohammed cartoons were published, riots ensued and people died. When the truly offensive Book of Mormon became a Broadway hit, the Mormon church thanked them for the publicity and invited outsiders to come see what they’re really all about. We should be mindful of which reaction we wish to validate. 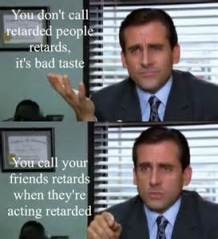 If the quirky Dr. Gee’s musings were off-color or flat, then the time-tested punishment of silence and awkward glances between audience members should have been sufficient. But in today’s culture of social conformity, we get the following sentence, which should make any fan of true human richness and diversity cringe:

Ohio State initially called the remarks unacceptable and placed Gee on a “remediation plan” to change his behavior.

Perhaps deciding that, at 69 years old, re-education camp wasn’t worth it, Gee instead retired. Hence, a predictable chorus rang out from the sports media, rapidly echoing the consensus that Gee’s retirement will allow Ohio State to get past this “distraction”, and focus on football. As if talking about genuine human interaction is less productive than obsessively analyzing spring intrasquad scrimmages. Come autumn we’ll have plenty of games to watch, but for now can we talk about the absurd contradictions hinted at by Gee’s musings? That institutions of higher learning are defined in the public eye by the 60 biggest jocks who roam the campus. People clamor for honesty, but as St. Paul observed, they often rail against those who tell the truth.

What did Gee say to incite such outage?

1. “You can’t trust those damn Catholics… The fathers are holy on Sunday, and they’re holy hell on the rest of the week,” Gee said to laughter at the Dec. 5 meeting.

I am Catholic (and not in a lazy “but I think the church is like so out-of-touch” way, but in a “I go to church every Sunday and once gave an honest effort to understand Transubstantiation” way), so the phrase “those damn Catholics” is not one I’m sympathetic towards. But those who might nod their heads in response to hearing it won’t be convinced otherwise by seeing how upset it makes everyone. And as the story notes, “he said it to laughter”. No one in the room took this as a call to arms.

In response, Notre Dame** should have started by thanking Gee for the blessing of insulting them for their faith (Matthew 5:11), and cleverly continued: “We are much too humble to extol our own holiness, but are quite certain that whatever we are doing has pleased God, as He recently rewarded us with an undefeated regular season that, unlike Ohio State’s, wasn’t rendered meaningless due to scandal.”

2. Gee said one of the Big Ten’s biggest factors in expansion is to “make certain that we have institutions of like-minded academic integrity — so you won’t see us adding Louisville.”

A playful jab? Not to Louisville basketball coach Rick Pitino. Speaking from the moral authority that comes with being a married father of five who shares Tiger Woods affinity for cocktail waitresses, Pitino called Gee “a pompous ass”, and said he wouldn’t accept an apology.

3. “You tell the SEC when they can learn to read and write, then they can figure out what we’re doing”

A clever response from the SEC schools would’ve been… well, they’re much too dumb to come up with a witty rejoinder, but they could still lighten up a bit too. If we are to remain a melting pot with a healthy common culture, we all should.

*Legal note: “Alleged” philanderer! Nothing has been proven in a court of law. Can’t risk a Herman Cain lawsuit shutting the site down. If we lose our ad revenue we won’t be able to afford the postage stamps for our emails.

** Though my personal hope is that Notre Dame took the insult to heart. President Obama, who in the Illinois Senate argued against protecting infants who survived abortion*** and once called a baby a “punishment”, was invited in 2009 to be Notre Dame’s commencement speaker and received an honorary degree. The babies slaughtered in Houston or Gosnell’s Philadelphia House of Horrors know all too well that you can’t trust the Catholics at Notre Dame.

***I know I just admonished everyone to lighten up and followed that by bringing up abortion, a very heavy topic. So sue me****. It needed to be said.